Some of the Pond Gang 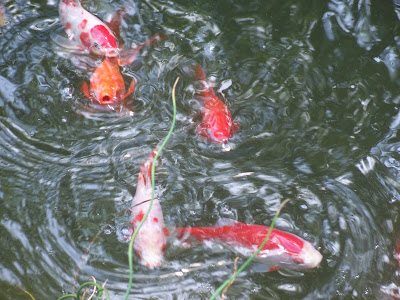 Here is some of the gang. Whenever I feed them I stand in the same place to do it. Today I was removing some rocks from the other side of the pond edge and they were excited that I was out there and thought they were going to get fed, so they all went over to the edge where I normally feed them. See, we aren't the only creatures of habit. Aren't they pretty. 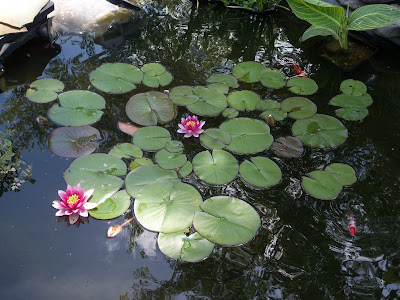 Since I have been talking about the pond so much (you know, the leak) I thought I would post a couple of pictures. One of the water lilies are blooming. See the fish in the right front of the second picture? The stuff that flies around from Cottonwood trees is so thick in the air and when it lands in the pond, it sinks to the bottom just like a wet piece of cotton. The fish think it's food and eat it, but then spit it back out! I think I found where the water was going over the liner in the waterfall today, keep your fingers crossed.

The pond is beautiful. I think waterlilys are some of the pretties flowers around! Good Luck with the leak!!!