Hello friends.  Would you believe that we had snow last night?  Just enough to cover the ground AND our new car, but SNOW.  A week ago it was 82 degrees and we were opening the pond and raking the yard! Just Crazy. 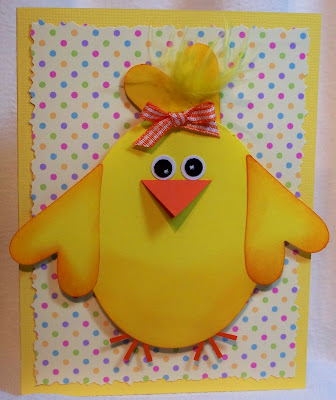 An oval, three elongated hearts, and two star burst punched pieces.
Added the feather and punched circles for eyes.  Beak is made by folding a small
square to form a triangle and gluing just the bottom portion down.

I was fooling around with punches today and made these cute little Easter cards.  Not so sure about the lamb, but loving the bunny and the chick.  I have seen various forms of the bunny online, most recently at Dawn's Stamping Thoughts.  The chick and the lamb I just winged it. 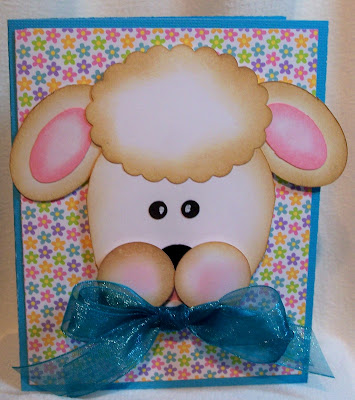 Rounded the corners of a rectangular piece for the head.  Ears are two different sized ovals.
Circle punches for eyes, nose, mouth, and cheeks. Scalloped oval for the curly head.
Used distress ink around the edges of all these. 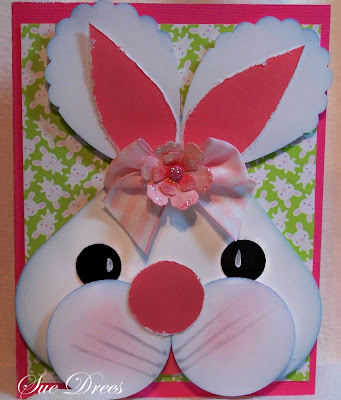 See Dawn's video for instructions using link about.
I have several little friends that I send cards to, and they are going to love these guys.
Thanks for stopping by today.  Hope you have a great Palm Sunday.  Until later........

these are sooo cuuute! lamb is also nice, sue! yep, although I would luv to receive it, definitely little ones will luv them even more! :-) wow, you had 80s' weather there?? In April, '96, I visited my friend in Buffalo, and i remember early April was still really cold...

Hi Sue -- I miss visiting you -- thanks for being a loyal follower and coming on over to comment on my lately unfrequent posts. These cards are just the greatest -- very clever and I know my Flat Shayna and my "Real Live Shayna" will love having one in her mailbox this Easter. Thanks for sharing another great idea.

Oh such fabulous use of punches, you are so talented! Love all three of them, especially the last one (the bunny).

aaaaaahhhhhhhhhhhh these are very cute sue.
you have made these beautifully.

ooooo wow Sue, they are all so adorable. Love them.

Hi Sue, Oh wow these are all stunning and so very clever too!:)x

These cards definitely get a big AWWWW!
Dawn does come up with some adorable creations, huh? Your's here are just darling and made me smile immediately. We had a very, very small trace of snow yesterday, but, like you said, working in the yard just a few days ago and now wearing winter coats again. YUCK!