SUMMER IN THE CITY

Hi blogging friends.  Thought I would post this card before I'm
off to lunch with friends I have known since we all went to school together.
We try to get together once a month to catch up with each others lives
and just to keep in touch.

Today's card is a little scene I created. 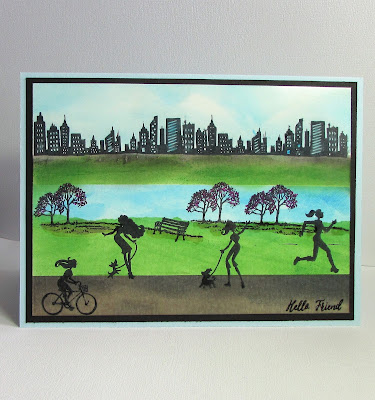 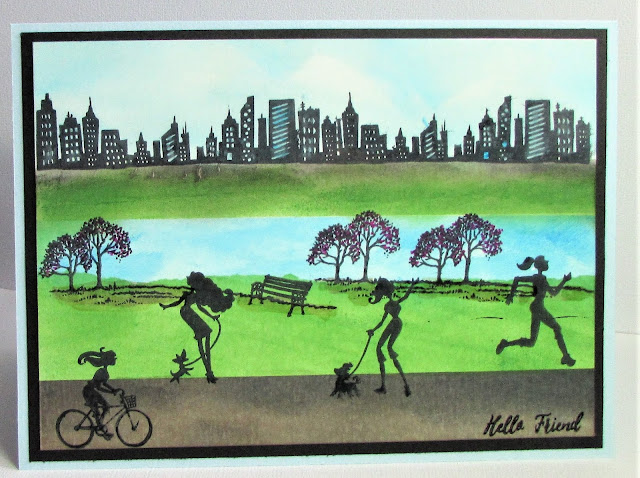 I sponged the bottom path first, using a sheet of paper
to block off the rest of the card. Used gray and black ink

Then I sponged the green grass area  by using
a piece of paper towel which I ripped uneven
on the top edge, and covered the path with a piece of paper and
sponged downward along the torn edge, removed
the paper towel and sponged Bundled Sage in
the space between the masked off path and the
edge we just created.

Next, I placed the torn paper towel where I wanted
the water to end,  Using Salty Ocean distress ink
I sponged downward over the uneven edge of the paper towel,
removed it and sponged in the area between the grass and the
edge you just created, first with Salty Ocean and then using tumbled glass
darkened some areas with the sponge, leaving some areas lighter
to mimic the reflections of the clouds.

Above the water, I created a little bank of green grass
in the same way except you use a straight edge
at the top.

Next,, I stamped my images in place using black dye ink.
I used the Misti to place the stamps where I wanted them.

At the top I sponged some Salty Ocean ink randomly, leaving
lots of white for clouds,

I also sponged some of the gray and black inks very sparingly
under the city to blend it into the grass.

The sentiment comes with the stamp set.

Thanks for stopping by today. Have a good day.  Until later.....

it's a very beautiful scenery and card Sue

Hope you had a nice meal with your friends. Sue

This card is absolutely adorable, Sue!!! What a fun day all those girls are having with their pets! Great colors and layout. Thanks so much for sharing with our products!!

A super card Sue, you have created such a fun scene.
Pauline - Crafting with Cotnob
x

Whoa! You have COMPLETELY captured my heart, Sue,! Lovely use of colors, with the high energy of the city silhouettes. Beautifully arranged with a hopeful, happy scene! Love it! Hugs, de

Your scene is simply AMAZING Sue! I love it! Hope your meeting was nice - oh I am sure it was! Hugs, Susi

I love your scene Sue, it's fabulous, love how you've placed the stamps and the buildings in the background, brilliant, Hope you had a lovely lunch with your friends, Kate x

Thanks for stopping by my blog, Sue. I just love this scene. It is brilliant! Thanks, for the well wishes on my hands, also. Old age ain't for sissies!

This little scene makes me smile! I feel like I could just step right into the page and join in on the fun! Great job...thanks for sharing!