A couple of months ago, I received an email from Julie Koerber at Power Poppy who Coordinates the "Hues to Use"challenge each week.  She was asking me if I would like to participate as a guest
designer for one of their challenges.  Well, duh, I jumped at the chance as I love Power Poppy stamps and digis and I love to color, so it was a no brainer.

The Hues to Use challenge is every Tuesday, and Julie provides you with three colors
and a picture depicting those colors.  You then enter a card using those colors on a
Power Poppy Stamp or Digi. 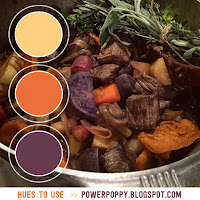 In the days that followed, Julie sent me the three colors I would
be working with.  My heart sank, eggplant purple, orange, and a buttery cream color.
Purple and orange are probably the two most unused colors in my stash of paper, markers, pencils
and embellishments.  But, I do love a challenge (and I had already said yes) so I went
to work  choosing a Power Poppy image from my stash that I thought I
could incorporate these colors into.

I won't lie,  there were four or five starts to coloring the image up
before I began to see that I could do this!

So without making you read or wait any longer here is my card
as a guest designer for Power Poppy's Hues to Use this week. 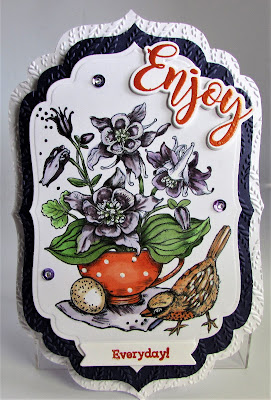 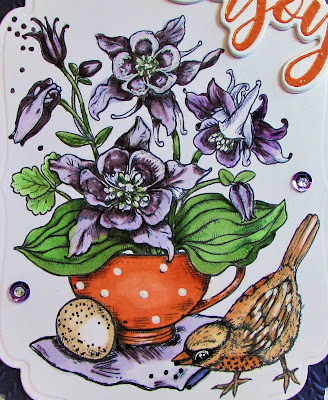 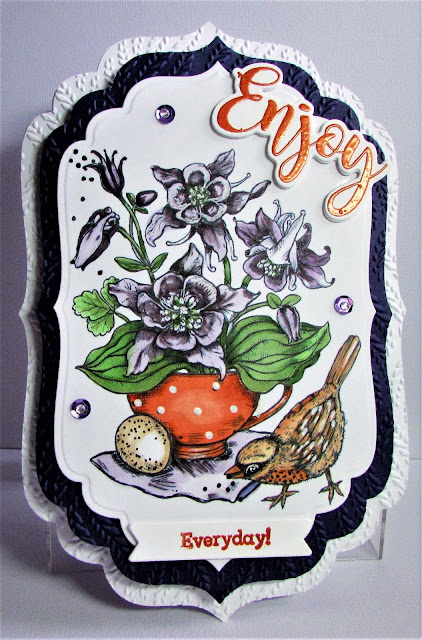 For my card, I chose the digi, Cup of Columbine, and colored it up with Copic Markers.
it out with the matching die in the set.
I then cut two more of the word Joy from white  card stock
and glued them to the back of the orange
embossed original to give it  some dimension when adding it to the card.
The word Everyday was stamped
on white card stock and embossed with the same orange embossing powder
and die cut with the glag die from the same set.
A few purple sequins were finishing touches to the card.

Thank you Julie for nudging this old gal and long time stamper
out of her comfort zone.  I appreciate the opportunity afforded to
me by guest designing this week.

Thanks friends for stopping by today.  Have a great day.  Until later.....

Labels: PP Hues to Use

Dear Sue, I was just over at Power Poppy and so excited to see you as a guest designer. YOur card and colouring is exquisite and I can see why you were asked by Julie to join in. One fabulous post. I have most of their stamps but sadly many Design Teams I am on prevent me from using them BUT I think I will HAVE to. Thanks for inspiration.xxhugs.

Hope you are having a nice day. Sue

Beautiful card, Sue. Great use of the colors. I love the shaped card. [Bunny]

A beautiful card Sue, such a gorgeous stamp - it works so well with those colours and your colouring is fabulous.
Congratulations on being invited to guest design.
Pauline - Crafting with Cotnob
x

Fantastic card. Beautiful image and colouring. So nice to see that you have been asked for a guest-designer. Great!! Have fun.

Wow, Sue! What a marvelous masterpiece! Congratulations on being the PP GT! Well earned, and a perfect fit! Your shaped creation makes great use of the colors and image. Like you, I enjoy my Grands. Thanks for sharing your lovely, beautiful card, Sue! You are such an artist! XXOO

Sue this is so beautiful x

How awesome you being a guest designer for Power Poppy!! Congrats my friend! Your coloring is amazing and you've made such a beautiful design here! I just love it!! HUGS

This is just stunning Sue and such an honor to be a GDT for PPoppy! Pretty exciting! Your creation is just beautemous!!! ♥ Sue Kment