Hello blogging friends.  I recently watched several videos on you tube by Kevin Nakagawa, owner
and artist behind the Stampscapes line of stamps.  Many years ago, I became interested in
scene stamping, and was fortunate enough to take a couple of classes with Kevin at the
Adventures in Stamping, Akron Ohio Stamp Show.This led me to teach several classes
at my local stamp store.  I amassed many of the stamps in his collection and enjoyed
scene stamping for a long time.  Then, the stamps became neglected and packed in
plastic bins with covers on a shelf.

After watching the latest video on his you tube video, I got the itch to get the
stamps out and create a card.  So, long story short, here it is, and since I ordered
some new unmounted stamps and have watched more of  his videos, this won't be
the last of the cards you will be seeing involving scene stamping from me. 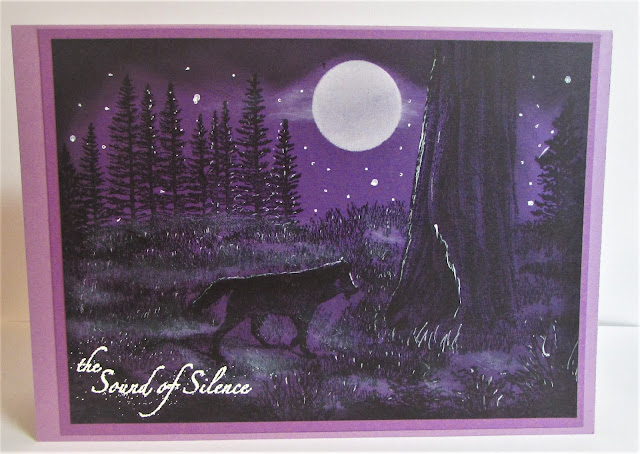 The card was created on deep purple card stock using pigment inks which are all
new techniques since I last used the stamps.

I am also a Wolf lover, and Kevin recently released an unmounted plate of
rubber stamps with wolves.  This is my first attempt , so expect to learn something
new each time I create a card.

Thanks for stopping by today.  Have a great day.  Until later.....

OMGOSH Sue what a stunning card, it's so dramatic inked in the purple shades. It's a beautiful scene, love the images and design, Kate x x

It's a fabulous card. I love that you did it in purple. Yay for you for using them again. [Bunny]`

A stunning card Sue, a wonderful scene, lovely purples and fabulous techniques - it looks like you are having great fun with your crafting.
Pauline - Crafting with Cotnob
x

Hi Sue, That is fab. I love the colours. Sue

Wow! This is very striking with the purple colors! You've created a fabulous scene and I bet that was such a great class to take!! TFS!! HUGS

Sue, this is gorgeous! That wolf looks so realistic! My friend, Shirley, has lots of stampscapes that she also rarely uses. Now I have the bug to borrow some! Thanks for sharing!

WHOA! How fabulous is THIS beauty, Sue! And still, you have achieved your trademark vibrantly colored hues in the "night" of the wolf! Really amazing! I can almost smell the wolf, and hear the night calls of critters hidden in the night's cloak of safety. It's gloriously done! wow! hugs, de