BSS IDEA = HOW SWEET IT IS

WELCOME TO THE BUFFALO STAMPS AND STUFF IDEA.
We have had a cold week.  The sun did shine on Sunday
which started to melt some of the snow piled up.
I have a very good long time friend in Texas.  I tried to
call her for two days and couldn't reach her.
We finally connected on Friday night.  She is okay, but
she lives alone, and had no heat or electric for four days
until late Friday afternoon.  Her cell phone needed to
be charged but she couldn't get to her car because of
the three foot of snow that had accumulated.
Finally, the young woman who lives downstairs came
up to check on her and helped her.  She took the phones, hers
and my friends to my friends car because she had a full tank
of gas, and charged them.  She lit the burners on the Gas stove
and fixed soup and tea.  She covered the kitchen door with a blanket
to keep the heat of the stove in the kitchen.  We have visited
Texas several times to see her, and it has always been so
darn hot, it is hard to believe that the temps were so low and they received
so much snow.
I have a fun card for you today. 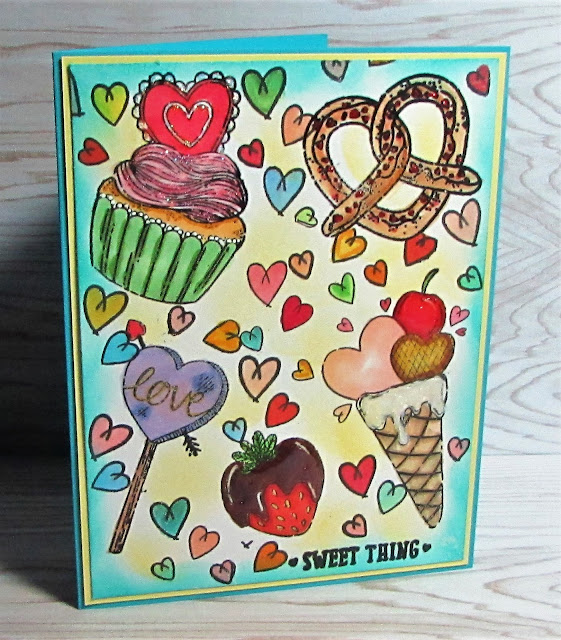 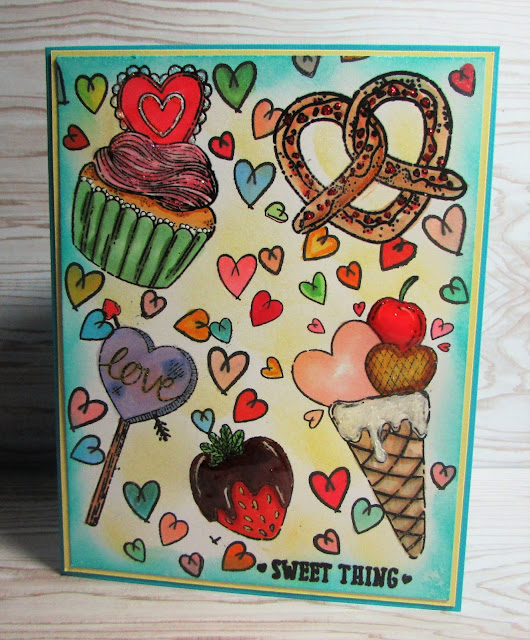 Stamp Set -My Sweet-Penny Black (30-785)
I used everything in the set except a second sentiment.
Paper-White, yellow and aqua card stock
I used lots of stickles, Glossy Accents, Liquid Pearsl,
gel pens and a white gel pen.
Lots of sparkle and shine, unfortunately the camera
doesn't pick it all up.
I love this set, so many uses for the wonderful images
in the set.
Thanks for stopping by today.
Have a good week.
Until later.....

what a colourful and cheerful card Sue
Gr Karin

Thank goodness the young lady checked on your friend and then was so helpful and kind.

Hope you have a good week. Sue

A fun card Sue, so bright and cheerful.
I'm glad your friend is OK, it must be scary to be on your own in that situation - we have elderly neighbours and always check that they are OK.
Pauline - Crafting with Cotnob
x

Your card is beautiful. The colors are great and the card looks like I could pick off a few items to snack on.

I'm sorry your friend has been going through such a hard time with that winter snow storm. I'm glad someone FINALLY checked on her. Bless her heart. [Bunny]

Hi Sue, Texas is having such a difficult time and I'm so sorry your friend had to go through such a frightening time, thankfully you were able to reach her, and she eventually got help.
We had to laugh listening to the Ted Cruz, lying his way out of being caught our going off on holiday, I hope when election time comes the Texans remember who doesn't care about them.
Your card is fabulous, love cake images and wonderfully coloured, a bright cheery card, Kate x

So sweet is your card x