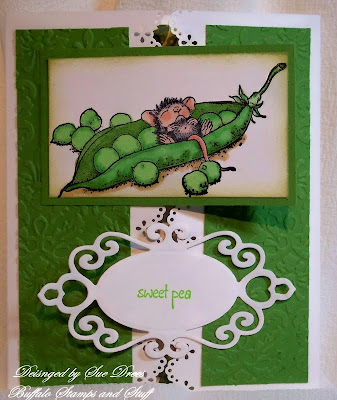 Hello, it's my Monday post for my local stamp store, Buffalo Stamps and Stuff.
Today's idea is a Gate Fold card with a two-way opening.  I made a regular gate fold card
81/2x 5 1/2, score at 21/8 on either end, crease and fold in to form base card.
Decorate the two front pieces with designer paper or card stock.  For this card, I used a
Martha Stewart punch to punch the edges of the gate folds. I colored my new little mouse stamp (Awww), the July stamp of the month from House Mouse called "Give Peas a Chance" with Copics and sponged the edges with green ink.  Mounted on green card stock.  I added adhesive to only the left half of the matted image and adhered it to the top portion of the card on only the left side
I stamped the sentiment, from a Stampendous baby set of small sayings, to the Spellbinder's Fancy Tags Two die.  Add adhesive to only the left half of the die and adhere it below the main image on the right side only.  Now, when you open the card, it opens two ways, from the top and the bottom because of the way you adhere the image and the die cut. 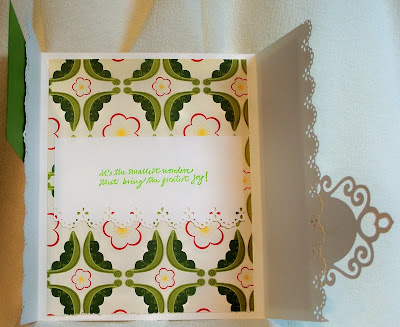 This is the card opened up.  The paper is from Cosmo Cricket and the sentiment is from Savvy Stamps.
Thanks for stopping by today.  Have a great Monday.  Until later............

love the different shape off card and your lovely stamp.

That sweet pea just tickles my belly. How cute is that. Your coloring skills are to be commended. This is just adorable.

Way cute, I like gate fold cards too. Just got this HM in the mail yesterday and haven't inked it up yet. Darling card.

Another beautifully colored image, and I really love the lacy edges of the gatefold. That adds so much to that style of card. Great stuff! Best, Curt

oohh this is adorable Sue :-) the image is just sooo cute !! fabulous colouring and design too :-)