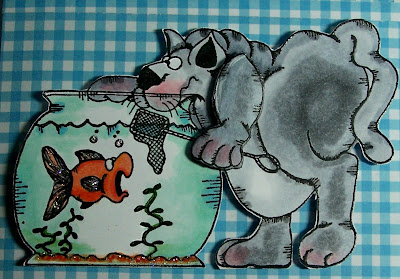 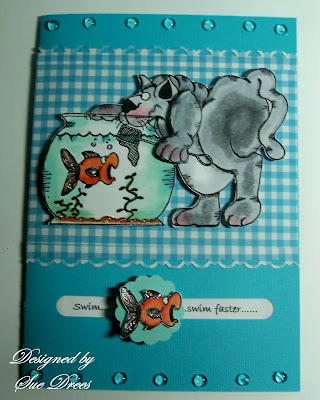 Hi and welcome to the Buffalo Stamps and Stuff Monday Challenge. Today's challenge is to make a spinner card. There is a great tutorial for putting this card together at www.splitcoaststampers.com/resources/tutorials/spinner_card/ . I actually cut out the
spinner channel first on my predetermined size card and decorated around it.
The stamped image is by Whipper Stamper. I colored with Copic Markers, cut it out and popped it up on matching gingham designer paper. The border punch is by EK Success. I trimmed the
top and bottom of the card with clear dew drops. The words inside the slot were computer generated to say Swim.....Swim Fast....Swim Faster... The fish was cut from a second stamping of the image and mounted on a small scalloped circle. The spinning mechanism is made with two pennies and a pop dot......so cute. The fish spins along the channel of the slot when the card is tipped.
Hope you have a chance to try making a spinner card. A great card to send to kids and adults alike!!
Thanks for stopping by. Have a great day. Until later..............

Got a good chuckle out of this one...love your new blog design and pic too!

another adorable card, love the image and the spinner card is something I need to try. Love your photo and the new look blog. Have a great week. hugs Jodie from Oz