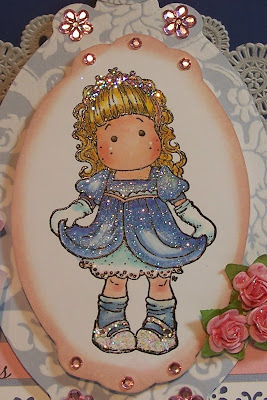 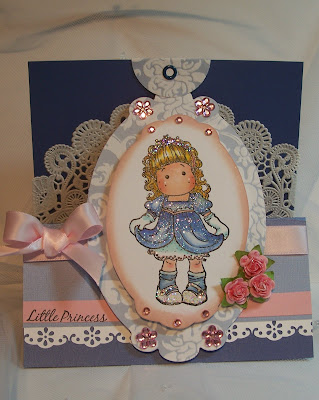 Today, I am off to schools this morning. Both kids are getting an award. Their school gives monthly awards based on character, and the teacher tells the class what the character trait for the month is and the children vote for someone in the class and the person with the most votes wins the monthly award. Then, they have an assembly and give the awards out. The children do not know who has won, but the teacher notifies the parents so they can come to the assembly if they want to. Well, Megan has won every year since Kindergarten at least one month and in several years more than once. Michael, on the other hand, has never won. Well, low and behold, the teacher notified Heidi that Michael was getting an award! The day that the award was to be given out, they had a snow day.............so tomorrow is the big reveal! He's going to be so excited. Hard to have a perfect older sister, but to his credit, he has ALWAYS been happy for her and her biggest supporter!
Today's card is a new Magnolia stamp. I think this is my favorite one of all the Magnolia stamps I have of Tilda. I have used a lot of glitter on her. I made the easel card from metallic blue cardstock. The background on the inside is a paper doily.
Hope you have a great Friday. Thanks for stopping by. Until later..................

Sue, wow wow wow, your card is stunning, a magical breathtakingly beautiful card, I have to agree she is one of my new favourites. I am so happy for Michael & Megan, what a wonderful surprise for them and I am extra happy for Michael. Big hugs Jodie from Oz

Awwwww, congrats Michael, how wonderful, and I'll bet big sis will be so proud to see little brother following those perfect steps to award success, woohoo!!! Special-excuse-for-icecream-day coming your way!!

This creation is lovely Sue, what delightful sparkle up against that regal blue, fantastic!!

This is gorgeous, Sue! Love all of the sparkle! Congrats to your Grandchildren and have fun honoring them today!

I can see why you love this image she is gorgeous, love what you have done Sue!
hugs
Sue x

I can see why you love this image she is gorgeous, love what you have done Sue!
hugs
Sue x

love how you made her little crown so sparkly! so very cute!

Have something on my blog for you hon.
hugs
Sue x

WOW what a fabulous day for your family! These awards are sooo important for the kids! Congrats!

Gorgeous card Sue :-) I have just ordered this Tilda ,,, so pretty . The papers and way you made this is fabulous :-)