You're My Cup of Tea 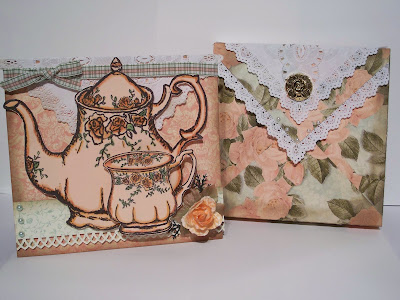 Beautiful digi image from Priscilla (http://www.priscillastyles-store.blogspot.com/) and her custom made envelope templates for extra thick cards. 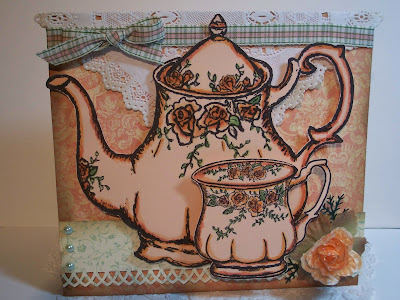 A closer view of the cared. The papers are Graphic 45. I copies the digi image of the teapot and cut onto peach colored cardstock. Colored with Copics and cut out. Popped up several times. Colored white rose with Copics and addes stickles. Border punch is Martha Stewart. 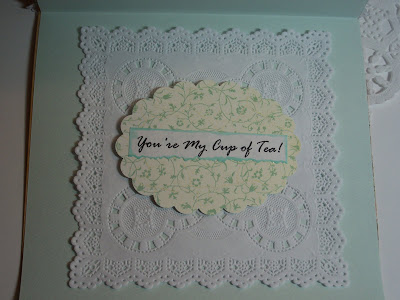 Inside of the card is also a digi image of sentiment.
Hello. Enjoyed some sunshine today and mild temps again today. Kids had the day off, but Mom had to work, so they came this morning. We went out to lunch and then on to Chuck E Cheese for some fun time. Was fun spending the day with them. Megan has been saving her money to buy an I Touch. She was almost there, so I gave her the what she needed to get it as an advance on her birthday gifts. She was thrilled, and as soon as Heidi came to pick them up, she wanted to go get it, well, about an hour later she called and said they were charging it and she would be able to use it tomorrow. She is so excited.
Todays card and envelope is a digi image I purchased from Priscilla, the site owner of the Midnight Madness Sketch Challenge. She has just recently opened an online store with some really unique merchandise. There is a link above and on the right. She is also giving away some nice stuff this month as the sponsor of the Midnight Madness Sketch Challenge, you should really go see (http://www.priscillastyles.blogspot.com/). I am loving the envelope template for making envelopes for thick cards so they don't get ruined trying to get them in a regular envelope.
Hope you have a great day. Thanks for stopping by. Until later..............

WOW; wonderful, i love it!

This is my cup of tea for sure!
I love this adorable little set. The soft victorian look is beautiful! I am loving the idea of an envelope for thick cards! Thank-you for sharing!

Love your tea party! Will have to go check out your links! Thanks!

I love this tea set and how you made this card with it! Beautiful card!

G'day Sue, this is stunning creation, you have done a fantastic job with Priscilla's templates/images, love the colours. Fuzzy Bunny is cute too love the flocking and love your take on the MMSC43, gorgeous colouring, take careX:)

What a beautiful card Sue,i love your image and papers.