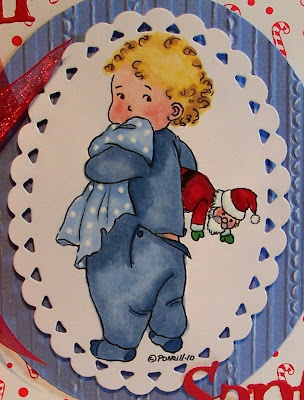 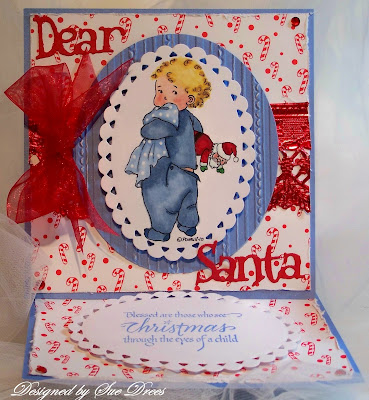 Can't believe it's Thursday already.  I'm thrown off now because I always get a dozen donuts on Thursday, hence, Donut Thursday, and take them over to my daughters house for Michael and Megan before getting them on the bus.  Well, first she went to Middle School and leaves earlier, so I don't see her, and now Michael has made the All City Band and they practice every Thursday morning, so Heidi is taking him and I don't need to go on Thursdays any more.  So now it has to be Donut Friday, that was the first question he had for me when he told me I didn't need to come on Thursdays any more!!
Today's card is for the challenge at Phindy's Place #28, which this week is to use your favorite color.  My favorite color is blue, but red is a close second, so I used them both!  This image is called Night Night Santa.  Is he too cute!  The papers are from an old Chirstmas stack.  The ovals are a Nellie Smellen die cut.  The Dear Santa and the embossing folder used on the blue oval behind the image is a Sizzix set.  The inside sentiment is from the now defunct Stampa Rosa.  I colored with Copic Markers.
Hope you had a great day.  Thanks for the visit.  Until later.................

Sue, this is absolutely wonderful! I just love your coloring of that little guy and your candy cane dp is perfect!
Thanks for playing at Phindy's Place!

I was wondering how Donut Thursdays were fairing, geez, Donut Fridays, that just doesn't have the same ring to it, now does it... Oh well, in time, in time Donut Friday will seem like the ways it's always been :)
Adorably sweet card Sue, these images and their charming vintage details are pulling me in!! The colours look great together and I love your colouring!!
I hope you have a splendid weekend!!
hugs, stephanne

this reminds me of my grandson Sue!

What a sweet card! Blue and red are my favorite colors also! You make them look great together! Have fun on your new Donut Friday!

What a great card. Your colouring is fabulous and I love the use of the nesties. Thanks for joining us at Phindy's Place.
Hugs!
Cec

this is a fav image and you have done this so proud! just tooooo KA-YOOT!
thanks so much for playing at Phindy's - hope you got to play in all the celebration challenges!
(and I love your header pic) (-:

Oh, sue, this is just precious! I'm so glad you joined us this week at PhindysPlace!

What a stunning version of this cutie, love it Sue!
Thanks for joining us at Phindy's Place
Hugs
Anne

Hi Sue~ I just love this card.
I am catching up on your blog with all that I have missed.
As usual you have been busy making marvelous cards.
It's so great that you made Donut time work for the kids' schedules. You are so kind.
I am off to check out some more of your lovely work.
Sonia